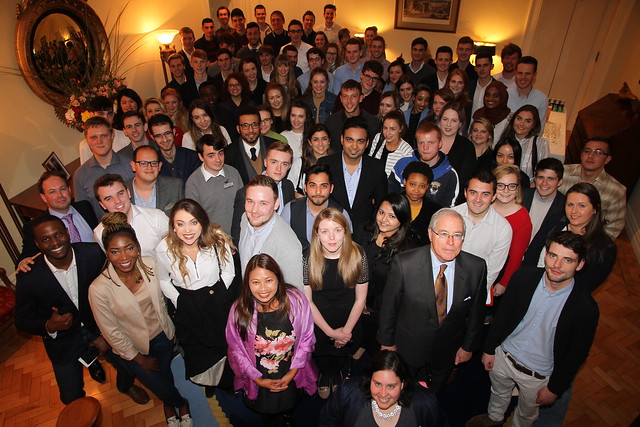 “It was pretty much getting to meet your team and seeing where everybody’s previous skills, majors, careers, whatever, would be able to help, so you could be able to do a multiple-week project over a weekend,” Hannemann said of the workflow of Friday night.

Saturday is when the real work began, with participants being shuttled to the Ryan Academy at around 9:30 am, where they would remain hard at work until 10:00 pm. The work didn’t stop there though.

“Even when you get back to the hotel, groups are still meeting up in the lobbies, or the rooms, or they’re out coding on their beds, so it’s like one unending stream of work,” Roberts explained. “I mean we got like, maximum, four hours of sleep a night, and probably less. Especially if you’re a programmer.”

Finally, on Sunday, the teams prepared to pitch their ideas to the myriad judges, mentors and fellow participants who were in attendance. Teams who completed a project and pitched it to the group were eligible to win funding for their project. But that wasn’t to say that groups needed to halt work on their projects as soon as the event ended. In fact, all three Champlain students who took part anticipate that they will continue their project to some degree in the future.

Each project in and of itself was entirely unique, and took a different approach to tackling not just the issue at hand, but also to helping victims of the Syrian civil war residing in active conflict zones. This, for example, is where Hannemann’s project was aimed.

“If a building gets bombed or if there’s a fire, an earthquake, whatever happens, and it goes down, the first responders are often not emergency personnel – they’re civilians,” she explained. “So we worked on a project that would be able to calculate the amount of people in a building and be able to send that information to the surrounding buildings, so when that building went down the civilians could check the surrounding buildings to know how many people to get out of the rubble.”

Bedard’s and Roberts’ projects were geared more towards making easier the integration process for refugees.

Bedard outlined his group’s project, involving city greenhouses that would provide food for displaced families, while at the same time providing jobs for asylum seekers and bringing in revenue to help all parties involved.

“Half of the fresh vegetables will go to the asylum seekers, cause food’s a huge problem,” Bedard described, “and then the other half they’ll sell to the local markets around. And then the revenue from that, half will come back to us to keep us expanding and even out our costs, and the other half will go to a community fund for asylum-seekers.”

Roberts’ project found its roots digitally, and was geared much more towards the integration process, taking the form of a chatbot-style application that would read voice commands in English, and search for the requests on the web. The app would use natural language processing to assist users who may not speak English as a first language in navigating an English speaking world.

“So to give an example,” Roberts explained, “if you asked it ‘where can I play soccer’, normally in Google, you’d have to search through a huge page of where to play soccer, but ours would also look at your GPS coordinates, and things like that, and determine where there are the closest soccer pitches near you.”

Hannemann and Bedard plan on continuing to collaborate with their groups to bring this project to fruition, while Roberts plans on using the foundations of his application for personal projects in the future.

While this year’s event was heralded as a success by all three students who took part this year, they were not the first Champlain students to do so. Last year marked the first year that study abroad students from Champlain College took part in the Creative Minds hackathon, with students Matt Stark (Computer Information Technology’17) and Michael Albrecht (Digital Forensics’17) contributing their efforts. Stark even was on the winning group last year, laying a successful foundation for Champlain involvement to come.

A speaking event at the Hackathon, photo credit: Kelsey Hannemann

All around, this event was rewarding for students in more ways than one. When asked about what one big takeaway from the event might be, all three students had different answers.

“Probably developing life skills in and out of a business situation,” Hannemann offered, “as well as being able to communicate with people from different backgrounds, from different places in the world and different cultures.”

Roberts felt similarly: “I guess it’s that given a common goal, everyone kinda seems friendly,” he said, “I think everyone was pretty approachable. I didn’t have a problem with communicating with anybody. And we all had something we shared.”

Bedard took away something a bit more on the personal side: “I would say the people. Getting to know them. All the friends.” 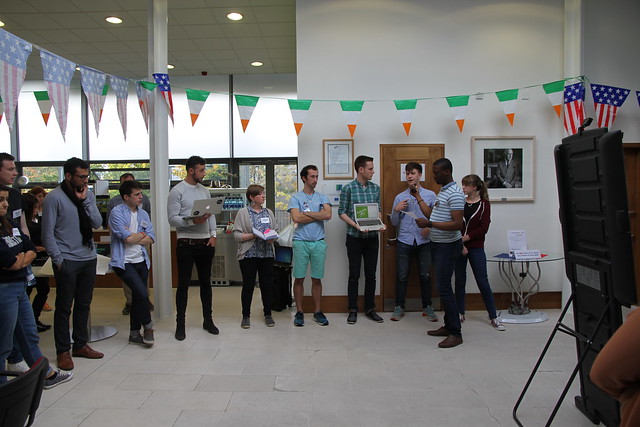 All in all, the event can be summed up by one echoed sentiment from Bedard.

“I loved it, to be honest,” he said. “The connections, friends, like, I still talk with my entire group. So it was good.”

APPLY NOW FOR YOUR INTERNATIONAL EXPERIENCE WITH CHAMPLAIN ABROAD!